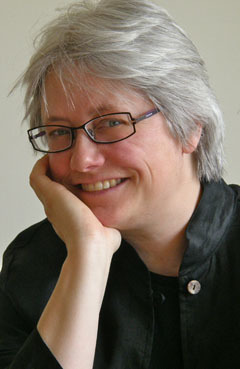 Marg Stubington is an active choral conductor, pianist and educator. She is the music director of the Canadian Centennial Choir (appointed in fall 2009) and at First United Church, Ottawa (since 2013).

A graduate of McGill University (Bachelor of Music: Piano) and the University of Ottawa (Bachelor of Education: Primary-Junior), Marg brings passion and creative energy to all of her work. Her seven years at the Suzuki Summer Institute in Montreal included teaching music theory and leading a massed choir of campers and their families. She was an instructor in music history and choir at the Ottawa Youth Orchestra Academy for five years, and led a large choir at the summer camp. Marg developed and directed the KidSingers children’s choir program for three years; it remains a thriving part of Ottawa's OrKidstra, a charitable social development program.

As a young musician, Marg spent many summers at the CAMMAC Music Centre (Canadian Amateur Musicians, Musiciens amateurs du Canada) at Lake MacDonald, Quebec, and has returned to the camp as a staff member. She regularly leads the choir and orchestra for the CAMMAC Ottawa-Gatineau Region’s Annual Concert.

Marg taught choral conducting and directed the choir at Carleton University School for Studies in Arts and Culture from 2011 to 2014. She is a regular choral clinician at Canterbury High School in Ottawa and St. Michael’s Catholic High School in Kemptville, and has led workshops with the Ottawa Brahms Choir, Musica Ebraica and the Arnprior Community Chorus.

In March 2018, Marg was one of six conductors selected to participate in the inaugural Amadeus Choral Workshop for Conductors presented by Lydia Adams, conductor and artistic director of the Amadeus Choir in Toronto.

Marg has encouraged the commissioning and premiering of choral works by Canadian composers: Donald Patriquin’s World Music Suite Three (2010) with Musica Viva Singers, and Nick Piper’s Nisi Pontus et Aer, Nothing But Sea and Sky (2014) and Laura Hawley’s In Song (2017) with the Canadian Centennial Choir.