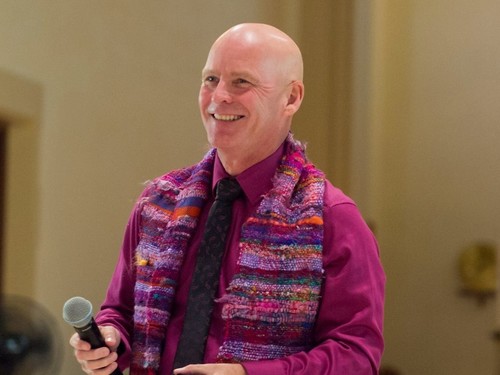 The United Church of Canada is the tradition of Brian’s choice. Brian was drawn into the UCC circle because of the deep spirituality and Christian faith he experienced in a non-literalist, questioning and questing denomination that has stood for social justice over the course of its history. He appreciates the diversity of the church.

Born on the shores of Lake Victoria, in Kenya, East Africa, Brian spent his childhood and early teenage years growing up in a multi-cultural, multi-religious setting. Brian is deeply appreciative for the diversity of personage and thought which swirled about him. He was the third of four children born to Pentecostal missionaries, and he considers Nairobi his hometown.

Transplanted at the age of 15, Brian completed high school in the Toronto area. During these years he immersed himself in the tradition of his birth, Pentecostalism. Feeling a call into ministry, he enrolled in Central Pentecostal College in Saskatoon, Saskatchewan. In this time of learning, there was opportunity to wrestle with many questions, questions which Brian carried with him as he entered congregational life in Kanata in 1985.

At this juncture, Brian continued his theological training at St. Paul’s University, a Roman Catholic seminary in Ottawa. This provided the context for a theological conversion within Brian, a conversion which was really a coming home to the questions he had as a boy. He was able to embrace his innate belief that Jesus was not the only way to know God, that the Bible is not the literal Word of God, and that the Christian community was to be a place of inclusion and not exclusion, especially in relation to issues of sexual orientation. For Brian, a richer Christian faith was born, a faith focusing on Christ’s care for the powerless in our society, and a faith that challenges religious structures that control through doctrinal purity, thrive on wooden literalism, and regurgitate pat answers.

After four years of ministry with the Pentecostal Assemblies of Canada, the theological rupture was such that Brian discerned that a change was in order. While completing his M.A. (Theology), he began attending First United in Ottawa, and found a faith home in this community and with The United Church of Canada. In January of 1993, Brian joined in ministry with the congregation of Northwestern United Church in Ottawa. In these 10 ½ years of shared ministry, the congregation embraced many new members. Brian is deeply grateful for the numerous faith and affirming experiences shared over these years.

In the summer of 2003, Brian was asked to assume the role of Executive Secretary for the Montreal & Ottawa Conference in a short-term “acting” capacity. It was an enriching experience to meet with the people of The United Church of Canada through Eastern Ontario and Quebec, as well as from other parts of the country.

In 2005, seeds were planted within Brian that ultimately led to both First United and Brian choosing to covenant with one another in the ongoing faith-life, journey and ministry of this congregation.